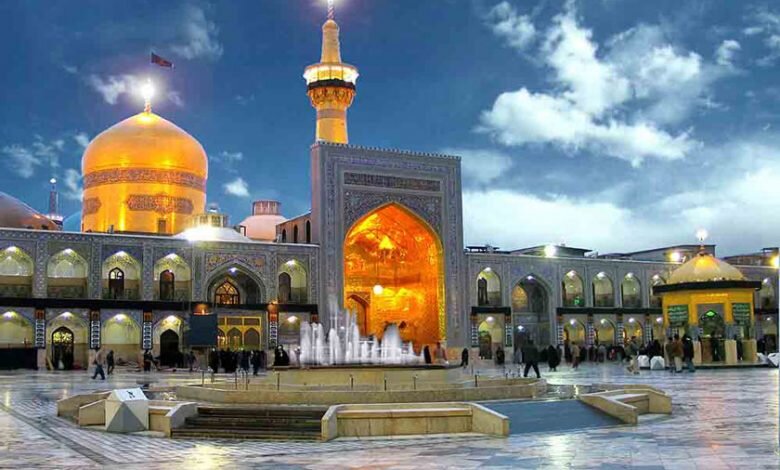 The Pilgrimage tour is a cultural tour and an introduction to important Muslim places and shrines. On this tour, in addition to seeing the historical and cultural sites of Iran, you can experience the use of hijab by using a Chadoor in religious places.

We will visit the Archaeological & Islamic Art Museum, the finest museum in Iran, where you’ll view a collection of ancient Persian civilization, the Golestan palace, and the carpet museum. O/N Tehran.

In the morning, we will transfer to the airport and fly to Mashhad. Upon arrival, we will visit Imam Reza shrine, Razavi museum, and bazaar. O/N Mashhad.

Drive to Neishabur, which was once a literary, artistic, and academic centre. It is famous for the shrine of the poet, Omar Khayyam, who died in 1123. On the way, stop at an old caravanserai which has been restored and wander through the streets of a nearby village where some of the famous Persian carpets are woven. O/N Mashhad.

In the morning, we will transfer to the airport and fly to Shiraz upon arrival. We will visit Eram Garden, Nasir-ol-Molk Mosque, Hafez & Saadi Mausoleum, Shahcheragh Holy Shrine, Vakil complex, and the most astonishing mirror decoration of Aliebnehamze Holy Shrine. O/N Shiraz.

Drive to Yazd; en route we will visit Qoran Gate, Persepolis (a castle made by free workers, not slaves in 500 BC), Necropol (tombs of Achamenian kings) and Passargad, the tomb of Cyrus the Great, which was the Achamenian center. O/N Yazd.

In the morning, we will explore on foot this ancient city. We will visit narrow alleys, the highest wind tower in the city, which keeps the buildings cool, the Friday mosque from the 14th century, and a Zoroastrian temple where sacred fire has been kept alive for hundreds of years and is now a Zoroastrian pilgrim center. This is an opportunity to learn about Zoroastrianism, the Persian religion before the Arabs introduced Islam to Iran.Then go to the Towers of Silence on the outskirts of the city, which was a burial place for Zoroastrians. In the afternoon, drive to Isfahan. En route, we will visit Naeen Castle and an old caravanser. O/N Isfahan.

In the morning we will visit Imam Square, the huge open square in the center of Isfahan with four monuments on four sides, including the Imam mosque, covered inside and outside with intricate turquoise tiles; the smaller Sheikh Lotfollah mosque contains some of the best mosaics from the 17th century; Ali Ghapoo Palace, which was the first skyscraper in Iran; and Isfahan Bazaar, where you can visit the workshop of artists who paint miniatures, sometimes on bone. In the afternoon, we will visit Si-o-Se Pol (thirty three) and Khajoo Bridges over Zayanderud, relax in one of the traditional tea houses, drink tea and smoke Persian water pipes. O/N Isfahan.

Continue to Tehran; en route we will visit Fin Garden in Kashan and the Masumeh shrine in Qom.O/N Tehran.

Transfer to Tehran IKA airport for your return flight.

We’re available to answer your questions

Tehran Travels Nili is a renowned travel company for distinctive cultural, archaeological adventure, natural, sports, and pilgrimage tours in Iran and it is a member of the International Travel and Tourism Organizations of Iran (ITTO) and Japan Association Travel Agents (JATA).

Subscribe to the free newsletter and stay up to date

what are you looking for

The link will be sent to your email